Amadou Keita turns into a cook in the Kolping-Gasthaus "HandWerk".
What the trainee has done in the last few years is "simply unbelievable" for his boss and trainer Matthias Köchig.

Amadou Keita turns into a cook in the Kolping-Gasthaus "HandWerk".
What the trainee has done in the last few years is "simply unbelievable" for his boss and trainer Matthias Köchig.

Not only that, the 19-year-old, who fled with 15 from his home country Mali, now speaks very good German. He is also great in the kitchen of the Kolping Restaurant "HandWerk", where he has been learning the profession of cooking since September. "I have to tell him something once, and he understands it immediately," says the chef.

Cooking has always interested Amadou Keita. He often helped his mother prepare a meal for the family. The guests of the Restaurant get a taste of the culinary delights of Mali through a dish with corn poulard breast, couscous and a fruity peanut sauce. This is the dish Amadou Keita offers in the menu. So that's how it tastes in West Africa! Amadou Keita smiles: "Well, something like that." In Mali, you eat this food much more spicy. But the teenager knows that German tongues like it gentler. "That's why we modified the dish together," says Köchig.

Learning to cook, that was "in" some time ago. The cookery shows on television tempted young people to get into this education. However, a lot of trainees jumped off soon. The profession of the chef is not only extremely creative - but also extremely stressful at times. Especially in the Advent season, the ten-member team of the founded by Kolping Education Center Schweinfurt inclusion company "HandWerk" has its hands full. But Amadou Keita gets along well when things get hectic. That's when the team sticks together. "We are like a family here", says Köchig.

Maria Kraft, Managing Director of the Kolping Education Center, is also enthusiastic about the trainee of the Restaurant. She would not wish for anything more than that Amadou Keita could stay in the "HandWerk" after his training. "Right now he has subsidiary protection," she explains. During the apprenticeship the young man will not be deported under any circumstances. Depending on how the situation develops in the civil war country of Mali, he may still be able to remain afterwards.

Amadou Keita has been in contact with the Kolping Education Center for some time. In May 2015 he came to the Kolping Youth Living. Until the age of 18 he was supported by the caregivers and teachers of the team. He now has his own room. "It's just five minutes from the Restaurant," said the African. He appreciates that he is still connected to Kolping. Because time and again an official letter comes in, which he does not understand despite his good knowledge of German. At the Kolping Education Center, he always finds someone who briefly reviews the letter and explains the content to him.

Amadou Keita has the feeling that in Schweinfurt he consistently meets with acceptance and solidarity. Even with the guests of the restaurant he has only had good experiences so far. "When I go out of the kitchen for a while, for example to get a glass of water, I get talked to often," he says. Preferably by those guests who have tried his Malian dish. Everyone, according to Keita, has been full of praise so far.

No difficulties are associated with the fact that Amadou Keita is Muslim. "I still prepare all dishes with pork," he says. Of course, he must also taste what he has created. Which Keita also has no problems. Although he is religious: "That's why I try to go to the mosque every Friday for Friday prayers." But he does not stick with formalities such as the ban on pork.

Those who want to live their faith should pay attention to other things, the reflected young man thinks. Believing for him means making an effort to become a good person. Anyone who has anything to do with him in Schweinfurt confirms that he succeeds in doing so well. 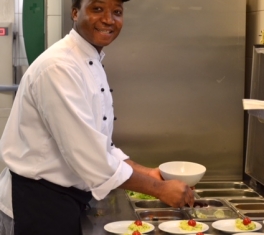 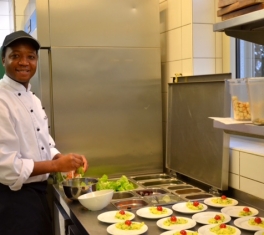 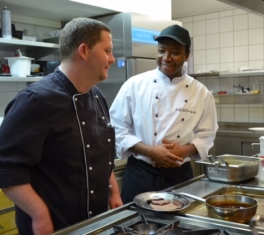 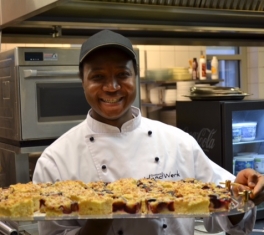 Directions
How to find us
The house is located about ten minutes from the center of Schweinfurt. Coming from the A70, take the exit Schweinfurt Zentrum to the B 286 in the direction of Schweinfurt. Then turn left after the 6th traffic light, at the St.-Kilians Church. Parking is available directly at the hotel.
Click here for the map
Contact
Kolping-Hotel GmbH

Opening hours of the reception
We are there for you

Late arrival with prior consultation possible.

We look forward to welcoming you in our hotel!